After an aggravating day at the J O B, I decided on an impromptu SOTA attempt with my newly built Penntek TR-35. I spent part of my morning building a Google map of an area near Sunriver, OR for a future Moto-SOTA adventure. Most of the summits in the area are drive/ride-ups but there are two that require a short hike, Pistol Butte and Bates Butte. I've been up Bates Butte on foot and mountain bike before, so I decided to try Pistol Butte.

Its about a 3 mile drive on good gravel/dirt after turning off the pavement off South Century Drive ~ 10 miles SW of Sunriver. The access road is rough so I parked the van at the intersection of FS-600 (43.82181, -121.55954) and walked up the road. The road goes up quickly but wasn't too steep until the last 200 yards or so, where it pitched up dramatically and I was happy I brought my hiking poles. I think the road could be done with a Jeep or motorcycle, I saw evidence of moto and UTV tracks. There is a really nice camp spot just below the summit, where the pitch increases,  if so inclined. 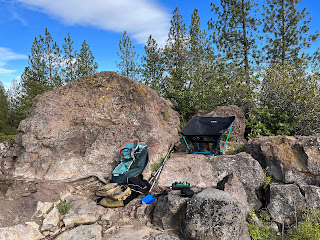 Once at the top I found a nice spot to setup on the west facing side of what appears to be the remnants of an old fire lookout. Temperatures were in the low 70's but there was a light breeze so I donned my jacket and sat down to try my hand on 20M. Using the built in memory on the TR-35, I keyed my CQ a couple of times until I had it just right and let'r rip. Crickets. More CQ. More Crickets. After about 35 minutes of nothing hearing anything, I decided to try 40M before packing up and heading out. That is when I noticed the ticks all over the place. I guess the wet spring was good for them, I'm not used to seeing so many ticks in our part of the world and was glad I was wearing long pants, a hat and shirt sleeves (not to self to do a thorough look-see when I get home). 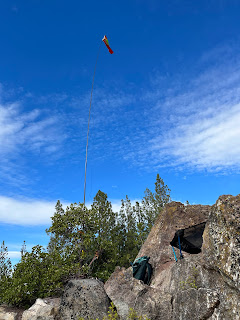 After about 10 minutes of calling CQ on 7.061 I started to get a few responses. Between my nervousness and some QRM, I had to ask for lots of repeats but I managed to confidently copy several QSO's. I had planned to pack up and 6:45PM to be sure to have light enough to get down and home in time for dinner. I was still short one QSO for the points so I hit the memory key one last time at 6:44:30 and started to pack up my chair. NT6E came back and after only one ..--.. I had my final QSO so it was time to pull the antenna down and get back to the van.

It took me about 15 minutes to descend to the van and call it a successful activation. Thanks to
for the patience as I stumbled along.
73 ..
at June 09, 2022

I wasn't sure if I was going to get out to activate this weekend due to the rain in the forecast but things cleared up and it began to w... 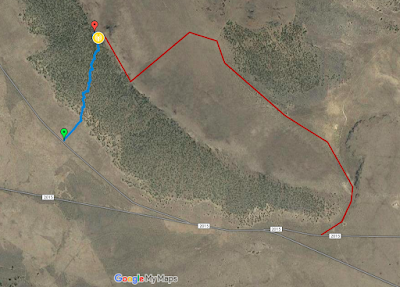 KC7UJO
it is all relative...